STEPS TO REGISTER FOR 3V3

Here are the steps to register:

1) Log in to Sportsengine and Register on our team site.

2) You will then need to submit payment through our registration site. (remember until payment is submitted your player's roster spot is not secured.)

3) Upon completion of your payment, you will be able to order your player's 3v3 Jersey HERE. (code: namebmer)

4) Now that you have completed all the necessary steps for registration, all you have to do is wait for tournament time! There will be periodic updates and schedule announcements two weeks prior to gameplay.

You will now see a charge on your account, and a detailed receipt will be sent to you via email.

Alexis Peterson is joining the NA Prep Spring program as our first ever Girls hockey coach in NA Prep Hockey History. Alexis was a 4 year NCAA women's hockey player from Marin University and is now the assistant coach. Alexis has been one of our summer coaches for two summers now and is making her way towards Montana and joining us this spring and summer. Her charisma and work with our players are the best around and we are happy to enter this new chapter of NA Prep's growth with her by our side. Everyone welcome Alexis. 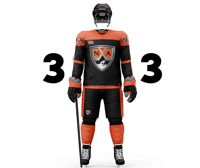 The goal of NA Prep 3 on 3 Spring Hockey program is to:

The reality is, you can be the biggest, fastest, and strongest player on the ice, but if you lack hockey sense and play-making ability, success will be hard to come by.

In an effort to promote competition, create parity and foster the very best playing atmosphere possible, our staff will make a conscious effort to group players based on age, experience and ability.

*Apparel and other team products will be available for purchase on the website.